Dollar bill origami is a fun way to pass the time when you have nothing with you but your wallet. If you've already tried your hand at making the dollar bill shirt, consider completing your two dollar man and craft a pair of pants to match.

How to Make Dollar Bill Pants

This simple pair of pants folds easily and pairs up well with any dollar bill shirt you may choose to create. This fold gives you a pair of pant legs, with an upside down triangular "body" portion in the center of the top. They hold their shape well, so you can easily make them ahead of time, along with a shirt, for a quick and fun gift. Use a crisp, new bill for best results.

If you're planning on mounting the pants with the shirt and not having the pants stand alone in any way, you can also use this very quick and easy fold to simulate a pair of pants that can be tucked beneath the bottom of the shirt. 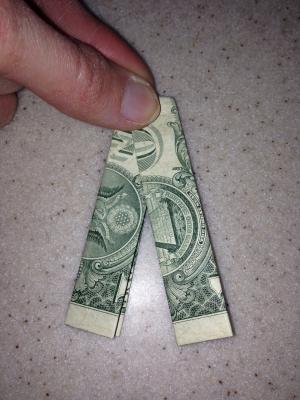 Folding money into origami shapes is a fun pastime, whether you plan to unfold them back into your wallet or give them as a gift. Try making either of these pairs of origami money pants and complete the cheapest suit you've ever owned.