Many people who enjoy origami find themselves fascinated by origami flowers, but not quite sure what to do with their creations. If you're ready for something with a bit more pizzazz than a row of flowers sitting on your bookshelf, consider incorporating origami bonsai into your home décor.

It takes a considerable amount of practice to be able to create origami with the level of detail seen in Coleman's sculptures. However, Coleman happens to be a gifted teacher as well as a talented origami artist. His website, OrigamiBonsai.org, offers a variety of helpful resources for paper folding enthusiasts who want to learn more about this unique style of origami, including folding videos, a free origami bonsai electronic magazine, and previews from his origami bonsai books. You can also learn more about his unique creations by visiting Benagami.com.

Recently, Coleman took the time to answer a few questions about his work for the readers of LoveToKnow Origami.

LoveToKnow (LTK): How did you first become interested in origami?

Benjamin John Coleman (BC): When I was about nine years old, my father came home with an origami book. The book, Modern Origami by James Minoru Sakoda, was unlike any origami book I had seen before. The models presented were more complex, and the instructions were easier to understand. When my father put the book down, I picked it up and haven't stopped folding paper since. When I wrote my first beginner book, Origami 101, I referred back to Sakoda's book to reflect upon his methods for presenting diagrams.

LTK: What is origami bonsai and how is it different from folding origami flowers?

BC: In the old days I'd fold a flower and use it to decorate a gift, or put it on my shelf, or give it to someone, and that's all I could do with it. A folded flower was something temporary that, once the allure wore off, would soon be thrown away. That's what origami has been for the past millennium. Lots of potential, but not much return. 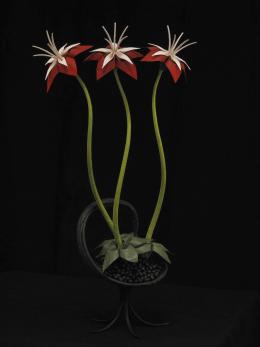 Origami bonsai is a fusion of origami, the art of paper folding and bonsai, the art of training trees little trees to grow in shallow planters. In the early days of development of origami bonsai, I glued flowers and leaves to branches I found in the forest. The resultant sculptures were beautiful!

In 2009, I developed a method for making branches from paper which I call "makigami." Makigami means "roll-paper" in Japanese. With origami and makigami I can control shape, size and color of my creations. Today, instead of origami sitting on a shelf, I have trees hanging in shallow planters on my walls, and amazingly real-looking flowering plants distributed throughout my studio.

LTK: What is makigami and how is it related to origami bonsai?

BC: Makigami is a new material made from recycled newspaper. I cut newspaper into a trapezoidal shape, saturate it with a liquid, and then tightly roll it into a tapered strip. I mold the strip into a natural looking branch-shape by taping it to a dowel. I use my car as a solar oven to cure the makigami. Once cured, the makigami branch is durable, and networks of branches can be assembled to make highly complex sculptures. Makigami allows me to control the shape of my projects. It's a lot of fun!

LTK: How do you come up with ideas for your origami sculptures?

BC: Almost all of my work is inspired during walks with my dog Rameses. We spend a lot of time in the woods looking at how trees grow; well, I look at how trees grow and Rameses chases chipmunks. I also visit greenhouses and arboretums for more inspiration. And you should also know that my mother, Dr. Annette Coleman, is a well known botanist full of ideas!

LTK: What is your favorite origami creation?

BC: In 2005 I had a severe case of insomnia. My sister Suzanne sent me a couple of origami books. One of the books had an eagle in it. Instead of sleeping, I'd practice folding the eagle. One night I mistakenly repeated the same fold on too many sides of the model. The shape I obtained looked a bit like a flower bud. I opened what looked like petals and realized I had a beautiful, unique flower in my hand. So my favorite origami creation is the shape I discovered that night. I call it the "Basic Flower Form." The basic flower form is an origami shape from which 20 distinct flower varieties can be folded. In other words, you learn how to fold one shape and then you can fold a vast array of flowers from that shape. It's a very powerful discovery. My book Origami Bonsai teaches how to fold the Basic Flower Form.

The Power of Your Imagination

Coleman's beautiful botanical sculptures are the perfect demonstration of why origami has been such a popular craft for so many years. Even though paper folding requires very few supplies, the results are limited only by the power of your imagination. If you take the time to experiment with origami bonsai techniques, you may be pleasantly surprised by what you can create.