Turtles are some of the oldest living reptiles, and have been used to symbolize everything from endurance to fertility. Making an origami turtle is a great way to pay tribute to these unique creatures.

How to Make an Easy Origami Turtle

This origami sea turtle is an easy project for novice paper folders. Children ages six and up should be able to fold this origami animal with a bit of assistance.

To make your turtle, you will need one square piece of paper. You can use origami paper that is colored on one side and white on the other or cut a sheet of construction paper to the right size.

If the paper is only colored on one side, begin with the colored side of your paper face down. Fold your paper in half diagonally. Unfold. Fold in half along the other diagonal. Your paper should now be a triangle 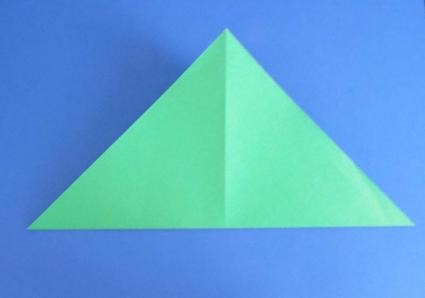 Bring the left and right sides of your triangle up so they meet the top point. Your paper should now be in the shape of a tiny diamond.

Fold the lower flaps of the triangles down so they touch the lowest point of the paper. 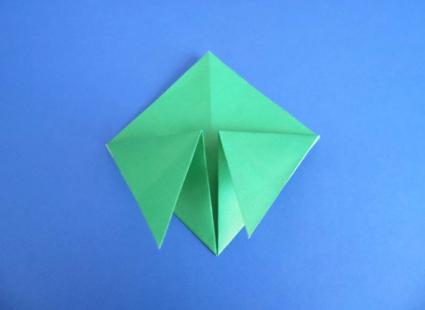 Fold the top of the flaps out. This forms the front legs of your turtle. 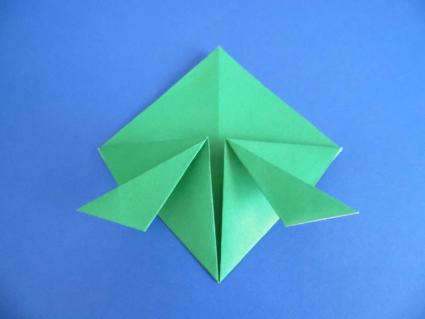 Carefully cut a straight line along the middle crease, starting at the top of your diamond and stopping at the middle of the paper. If you are making this origami project with a child, have him or her use safety scissors.

Fold the flaps you've just cut outward in the same direction you folded the flaps in the previous step. This forms the back legs of your turtle. 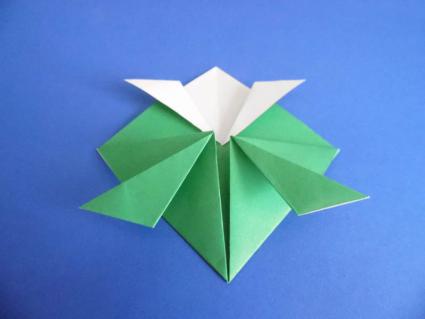 Fold the left and right sides in. This creates the sides of your turtle's shell. 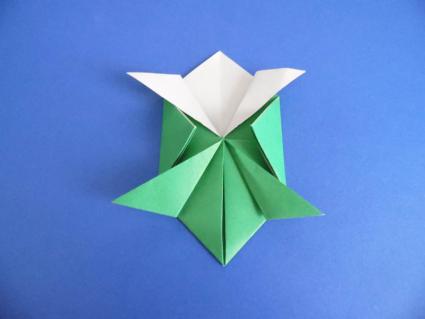 Fold the bottom point upward, then fold downward leaving a small gap. In origami, this is called a step fold. The step fold forms your turtle's head and completes this origami project. 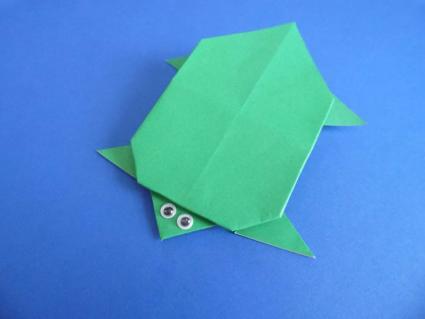 If desired, you can decorate your turtle with markers, colored pencils, or crayons. Decorating origami animals is a fun way for young children to express their creativity. Most children love to add wiggle eyes to their origami animals for a bit of pizzazz.

Since the origami sea turtle is a traditional model, it appears in many origami kits that include patterned paper to help crafters fold realistic looking figures. The sea turtle in the picture at the upper right hand corner of this page was folded using paper from an "Origami Sea Animals" kit by LPF Puzzle. This kit includes papers and directions for four different simple origami figures and sells for $1 at Dollar Tree stores nationwide.

If you're an experienced paper folder, this origami turtle designed by Robert J. Lang is a very lifelike model. It is featured in the book Origami Design Secrets and presented in this video tutorial by Jo Nakashima with the permission of Mr. Lang.

Folded money origami figures are a clever way to give a cash gift or tip. This tutorial demonstrates how to fold a money origami turtle from a single dollar bill.