A real mouse in your bathroom might make your skin crawl, but a towel origami mouse is sure to bring a smile to your face. This design can be folded in five to ten minutes, which makes it the perfect way to surprise unexpected guests. It requires only basic folds and is suitable for an adult beginner or an older child who is interested in towel origami.

The mouse requires one hand towel and one washcloth. You can use white or colored towels depending on your preference. Brown, tan, cream, or light gray towels would be especially cute with this design.

Place your hand towel in front of you in a horizontal "landscape" orientation.

Fold the lower part of the towel 1/3 of the way up. 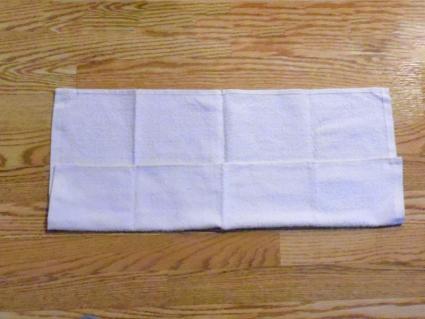 Fold the upper third down. Fold the left corner over to make a triangle shape. 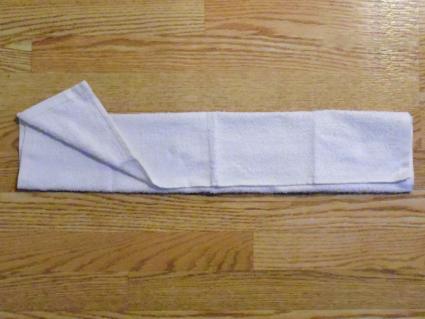 Roll the towel tightly to the right. This creates the tail and body of your towel mouse. 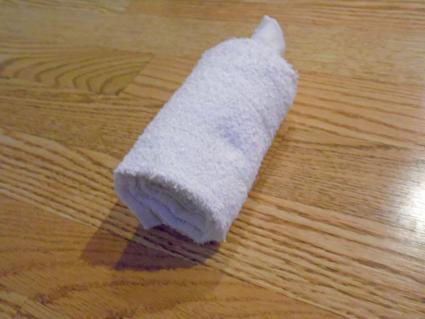 To make the face of your origami mouse, you'll need a washcloth in a color or pattern that matches your hand towel. Fold the washcloth in half diagonally to make a triangle 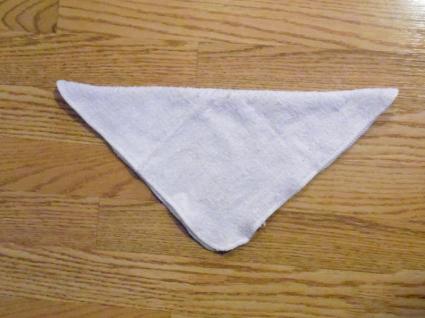 Fold the bottom point of the triangle up to meet the top edge. 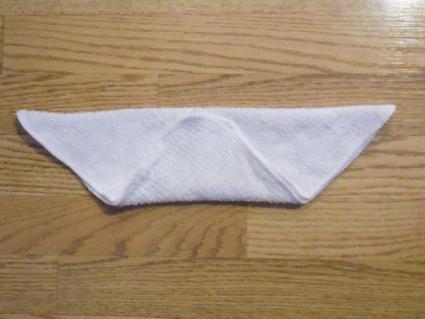 Fold the left and right sides down. 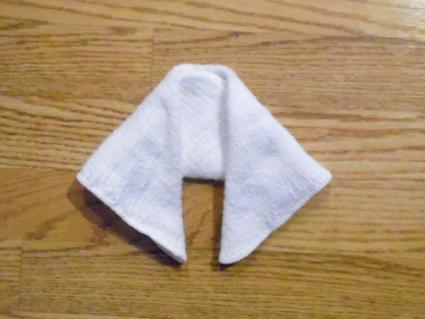 Fold the shape in half. Turn it over and spread the top two flaps apart to make ears. Place the head on the body shape to complete your mouse.

If desired, you can decorate your towel origami mouse by adding large wiggle eyes or buttons with a bit of double sided tape. Self adhesive foam shapes purchased from the children's section of a craft store would also work for this project. Use a pink pom pom for the nose. 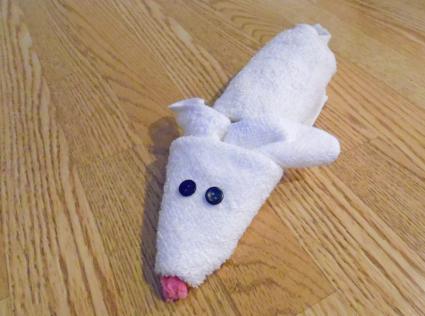 This towel animal design is simple enough that you should not need to add any reinforcements. However, if you want to transport the model to another location or include it in a homemade gift basket, you can use safety pins or rubber bands to secure the folds. If you use safety pins, choose pins with colored tips that make it easier for the recipient to find and safely remove them before using the towels.

If you're making towel animals to surprise a visitor, try folding several mice and placing them at intervals that suggest they are scurrying across the bed and floor of your guest's room. You could also try making a towel origami cat and have the cat appear to be chasing the mouse.

If you're using colored towels, consider folding a wedge of cheese for your mouse from a yellow washcloth. Leave a sign next to the towel figures with the motivational saying, "The early bird gets the worm, but the second mouse gets the cheese."

Brighten Your Day with Towel Origami

Even though towel origami creations are designed to be temporary works of art, they are a fun way to brighten someone's day. By mastering simple models like this mouse, you'll always have a way to give your friends and family a much needed pick-me-up.