If you're fascinated by the history and mythology surrounding unicorns, making an origami unicorn can be a good way to explore your interest while building essential paper folding skills. This easy origami unicorn introduces the rabbit ear fold and the reverse fold, two concepts that will help you prepare to move from beginner level models into more advanced origami creations.

This easy origami unicorn was designed by Perry Bailey. It is based on the bull designed by George Rhodes, which first appeared in The Art of Origami by Samuel Randlett. Bailey designed the model for his daughter as an alternative to the more complex origami unicorn designs. The model is in the public domain.

Traditionally, unicorns are depicted as white horse-like animals. Fold this design using white origami paper or cut a sheet of letter-sized copy paper into an 8 1/2 inch square to use for the project.

This design begins with a kite base. The kite base is a common origami form used to begin many different types of origami models, including the traditional origami swan. To make a kite base, fold your paper in half diagonally. Unfold. Fold two of the opposing corners in to meet the middle crease. This creates a shape that resembles a sideways kite. 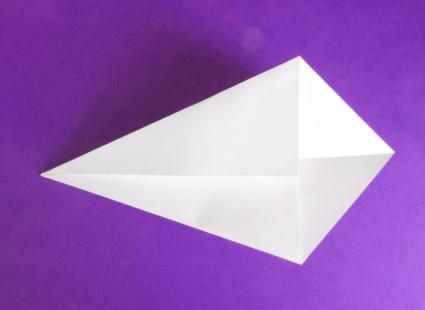 Fold the top and bottom sides of the paper in to meet the middle crease once more. 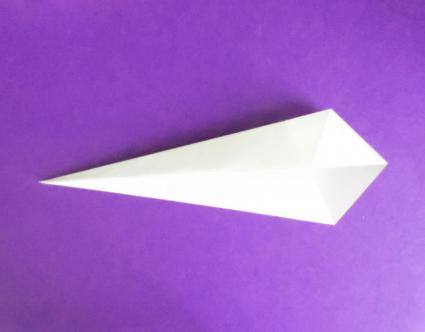 Unfold the folds you've made in the last step. The next step in this project is to create two rabbit ear folds on each side of the widest part of the kite base. The rabbit ear folds make what will eventually become the front legs of your origami unicorn. 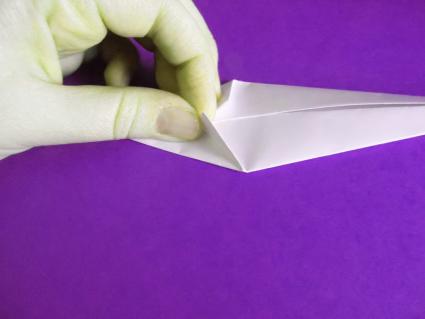 Fold the model in half along the middle crease. Turn it over and make a reverse fold along the smaller end. This begins the hind legs of your unicorn. 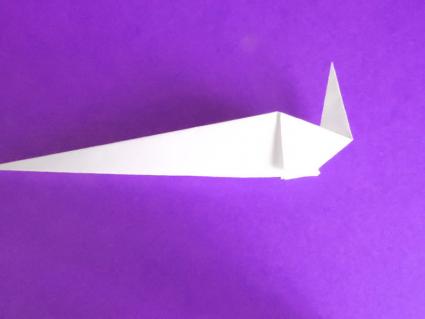 Make a second reverse fold to finish the back legs of the origami unicorn. 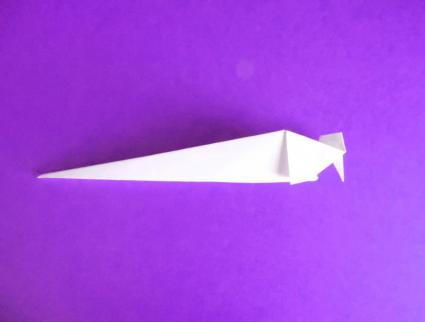 Make a reverse fold on the long, thin end of the paper. Position the fold so it touches the front legs of the unicorn. 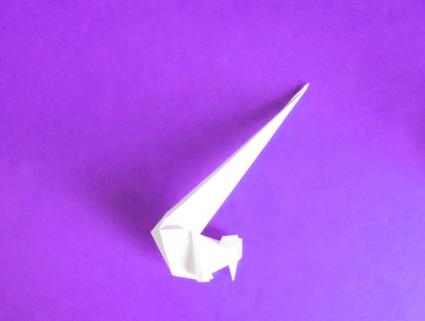 Make a second reverse fold to form the neck of the origami unicorn. 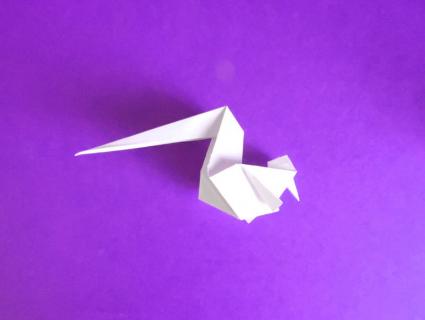 Make a reverse fold to form the head of the unicorn. 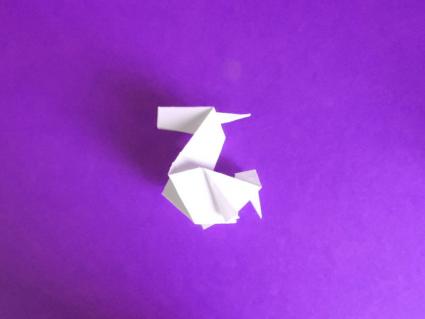 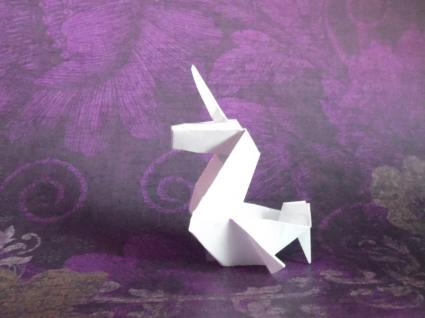 Practice the following origami folds to ensure success with your folded paper unicorn.

To make a rabbit ear fold, a corner of the paper is pinched in half to form a new point. Make two intersecting valley folds. Unfold the paper, then refold both folds simultaneously. Push the overlapping flap to the right so it resembles a rabbit's ear.

A reverse fold should be done so that the ends of the paper are in between different layers. When making a reverse fold, two or more layers are folded along a single crease. It is sometimes called a hood fold.

After you've mastered the easy origami unicorn, you may want to attempt a more advanced version. John Montroll has created a lifelike unicorn that is appropriate for the experienced paper folder. Diagrams for this model can be found in Montroll's book Mythological Creatures and the Chinese Zodiac in Origami. The folding steps are demonstrated in a two part video:

If you enjoy fantasy themed origami projects, try following up your origami unicorn with a few origami dragons. Folding a collection of mythological creatures can be a unique way to decorate your home.

0
Comments
© 2006-2021 LoveToKnow, Corp., except where otherwise noted. All Rights Reserved.
Resources, Advice & Tips for Covid-19
Read More
How to Make an Origami Unicorn