Origami, the Japanese art of paper folding, has been around for centuries. Unfortunately, no single person is credited with inventing the concept itself. Multiple masters of the craft have shaped its development over the centuries.

The following is a brief timeline of origami.

The term origami is Japanese and means folding paper. It comes from the words oru (to fold) and kami (paper).

In the earliest days of origami, paper was an expensive luxury item. Wealthy Japanese families were the only ones who could afford paper, so origami figures were used to designate special correspondence or presented as gifts. For example: 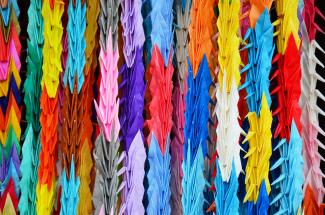 Once the price of paper decreased, origami became a craft enjoyed by a wider range of Japanese people. A noteworthy origami tradition is the folding of a senbazuru.

A senbazuru is a collection of 1,000 folded paper cranes strung together on one or more strings. Japanese tradition states that folding 1,000 paper cranes gives you the chance to make one special wish. The senbazuru was the subject of the first book ever published about origami. Hiden Senbazuru Orikata (Secret to Folding One Thousand Cranes) was published in 1797. Unfortunately, the author of this important work is unknown.

In contemporary times, the tradition of folding 1,000 paper cranes is closely associated with Sadako Sasaki. After the Hiroshima nuclear bomb fell on Japan in 1945, Sadako was one of many people who developed leukemia due to radiation exposure. She tried valiantly to fold 1,000 paper cranes while she was in the hospital being treated for her illness, but passed away before she could finished the project. Her friends and family completed the senbazuru in her honor.

Sadako's story is the basis of the children's book Sadako and the Thousand Paper Cranes by Eleanor Coerr. She's widely regarded throughout the word as a symbol of the effect war has on innocent children. There is a large statue of Sadako holding a golden origami crane in the Hiroshima Peace Memorial Park.

Development of the Yoshizawa-Randlett System

Often referred to as the grandmaster of origami, Akira Yoshizawa (1911-2005) started working with origami when he was just three years old. By the time he turned 26, he turned to practicing origami full time.

Yoshizawa invented the popular wet folding technique, which involves lightly spraying thicker handmade paper with a fine mist of water to create rounder and more sculpted models. His work has been featured around the world, including the Amsterdam's Stedelijk Museum, the Louvre in Paris, Cooper Union in New York, and Mingei International Museum in San Diego. He also founded the International Origami Society.

Yoshizawa is famous for having created his own designs instead of relying on traditional subjects and diagrams. In 1954, he developed a system of symbols to standardize origami directions and make it easier to teach others how to fold a particular model. Previously, every folder used their own unique diagramming convention.

Samuel Randlett's The Art of Origami, published in 1961, described the system in greater detail and added a few symbols to explain concepts such as rotate and zoom in. Since then, the Yoshizawa-Randlett system has been used by origami enthusiasts around the world.

By removing the language barrier, the Yoshizawa-Randlett system was instrumental in making origami the popular art form that it is today.

Traditionally, origami is defined by folding a single sheet of paper without making any cuts or using adhesive. Modular origami redefines paper folding by creating complex models from many identically folded units. The Sonobe model, credited to Mitsunobu Sonobe, was invented in the 1970s and is credited with popularizing this subset of origami.

Paper Folding in Other Cultures

The term origami is Japanese, but similar types of paper folding have been practiced in many other cultures. For example: 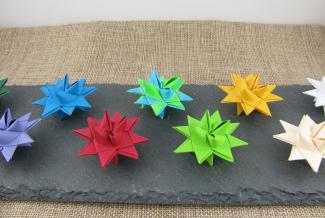 Modern Influences Take Paper Folding to the Next Level

Modern influences on origami range from creating sculptures that are massive works of art to making representational figurines with the most simple origami diagram possible. Geometric designs and shapes continue to fascinate mathematicians and laypersons alike, with folders drawing from Japanese traditions as well as those of other countries around the world.

The question of exactly who invented origami is one that may remain unanswered. However, new theories, techniques, and diagrams will continue to ensure origami's place in history for years to come.

6
Comments
© 2006-2020 LoveToKnow, Corp., except where otherwise noted. All Rights Reserved.
Who Invented Origami?