An origami dove is a popular origami choice because it is one of the simpler animals to fold. Once complete, these can be placed in a Christmas tree as an ornament. They can also be used as gifts or as toys for children who wish to pretend they are a bird.

To create an origami dove, you will need a square sheet of origami paper. If using a sheet with one colored side, start with the colored side down. Follow these steps to create a beautiful dove.

That completes the origami dove. You can reposition the wings by squeezing the bottom fold at any angle. By pinching it and releasing it, this allows you to create the look of movement with the wings. Kids will love to play with the dove like this.

For pictures and a few more variations on origami doves, these resources can help. 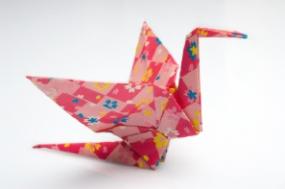 Create as many of these origami doves as you would like to create a flock of beautiful birds. Give to friends as a sign of peace. Try different colored paper and various sizes to create variation from one dove to the next.