An origami bird base is a traditional base that is a good skill to master for beginners to origami.

Origami bases are a set of simple, abstract folded figures. While the paper may not look like anything after being folded into a base, it is simply the starting point for making origami things. Learning traditional bases, like the preliminary, frog and bird, makes it easier to complete other origami projects. 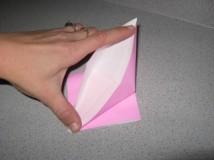 The process used in Step 5 through Step 7 makes what is known as a petal fold. The petal fold is one of the easier folds in origami. Begin with crease lines that form a triangle shape on the top layer of a folded paper. Push the top layer of the bottom point up, flattening as you do so. The two sides should then meet in the middle when completed successfully. Watch some origami videos that animate the petal fold process if you need further explanation.

To use the bird base at its best, follow these tips:

Speed through your origami projects by creating several bird bases to keep on hand. Use a variety of paper colors and sizes so you can just grab the one you need for a new project without having to make an origami bird base every time. For realistic animal representations, choose natural colors like tan, white, brown, beige and ivory. More fanciful figures, like origami dragons, can use deep purples or shocking red papers. In fact, you can even use patterned papers to create cranes and other birds.