Towel animals are fun to fold and make cute surprises for visitors to your home. Once you learn how to make a few of these fun creatures, you are sure to impress your family and friends with them.

A towel swan is the perfect introduction to towel origami. To get started, you'll need a white bath towel, a white hand towel, and a smooth folding surface.

Spread the bath towel out so one of the long sides is facing you. Start rolling the left and right sides of the towel towards the mid point of the towel. 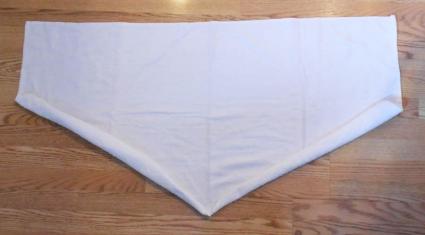 Keep rolling until you reach the middle of the towel. Rotate your shape 90 degrees.

The point becomes the beak of the swan. Gently shape the towel back on itself to make a swan shape. Roll the hand towel lengthwise. Fold it in half, and put it on top of the body of the swan. This provides the support needed to prop up the neck of your creation, which gives it a more realistic looking appearance. Without the extra towel, your swan is easily mistaken for a duck. 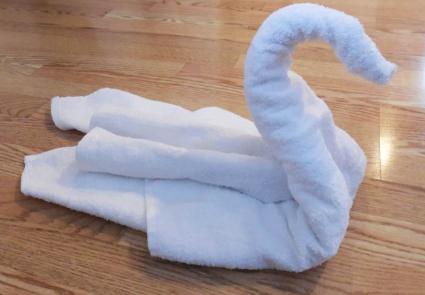 Cat lovers will enjoy making this towel origami folded cat. You will need one bath towel and two hand towels. The towels should all be the same color.

To get started, open a large bath towel wide on the floor. From one of the shorter ends, begin to roll the towel up until you reach the center. Repeat with the other side, making tight rolls. They should meet in the center. 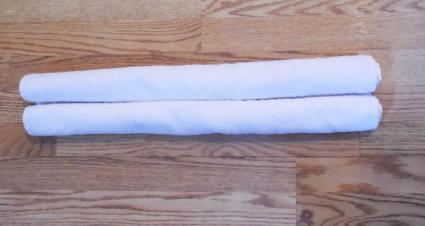 Holding both rolls in your hands, turn the end closest to you under so the bottom third is underneath the rest of the length. This will be the body of your cat. 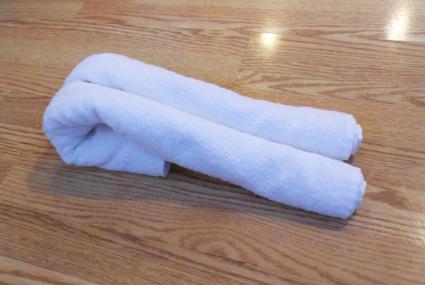 Position a hand towel in front of you so that the shorter edges are closest to your body. Fold it in half lengthwise. Begin to roll the towel into a cone shape, starting at the upper right hand corner and stopping about half of the way down the towel. Try to keep the roll as tight as possible. 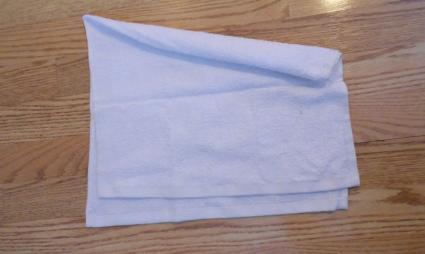 Next, take the unfolded edge and begin to roll it towards the center. Now, you should be rolling the towel towards the other roll. Continue to roll until they come together.

Pick up both rolls together and check that the hand towel is tightly rolled up. Position the cone shape with the large end down in between the rolls of the first towel. Position the cone at the end of the towel right above where you folded it under. This should help to hold it in place. This completes your cat's tail.

Take a third bath towel and fold in half. Take the edge with the flaps and fold towards the middle. However, extend the fold about 2/3 of the way over. Pick up the towel by placing your fingers at both points on the edge, where you just folded it. This will allow the extra portion to fold back, behind the original fold. 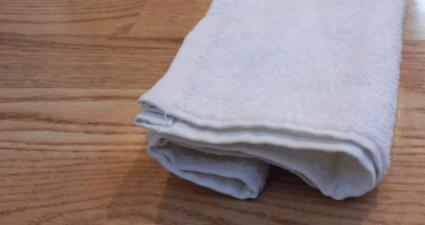 Lay the towel on the floor again. Then pick up one of the corners and fold inward, creating a triangular shape. It should extend past the folded edge. You are creating the cat's ears here. Do the same thing on the opposite end. 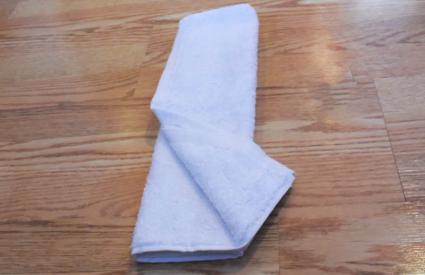 When completed, you end up with a cat that looks as though he is sitting with his front legs stretched out in front of him. 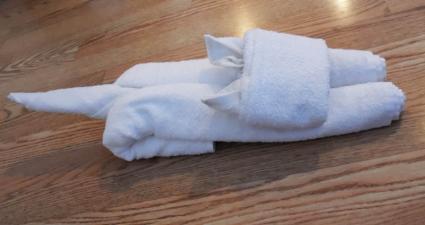 A towel elephant is one of the most popular animals found on cruise lines and at luxury resorts. You will need one bath towel and one hand towel for this design. Both towels should be the same color.

Lay your bath towel out in front of you horizontally. Fold the left side over about six inches, then fold this folded end over another six inches. Repeat this process on the right side. This step is important because it creates the weight at the bottom of your elephant's feet, which is needed to make your finished model stand upright. 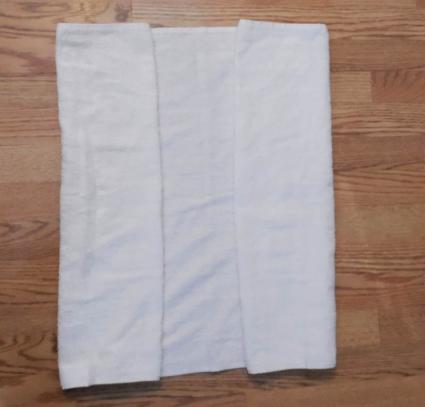 Roll the top and bottom ends in towards the middle so you have a long scroll shape.

Fold this shape in half and stand it upright to make your elephant's legs. The flat side of the towel should be facing inward. 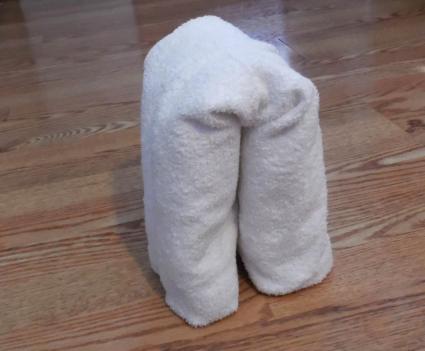 Position the hand towel in front of you horizontally. Roll the left and right rides in to the middle at an angle in the same way you did to form the base of your towel origami swan. This will form the head and trunk of your elephant.

Flip the rolled towel over. Turn the pointed end up to make a trunk for your elephant. Fold the top layer of the end with the two rolls down to form a face for the elephant. Adjust the folds on the far left and right to make ears.

Place the the hand towel on top of the bath towel to complete your towel origami elephant. 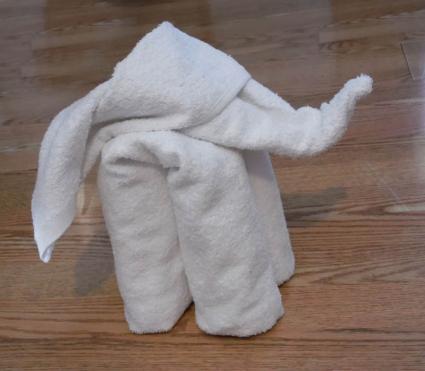 Inventing Your Own Towel Animal Designs

Once you've folded these animals, try your hand at a cute towel bunny complete with accessories. Since many towel animal designs use the same basic folding techniques, you can then try inventing your own designs after folding these animals. Your signature creation is sure to bring a smile to your guest's face!