Learning how to make a paper knife is easy when you utilize both video instructions and online origami diagrams.

Supplies needed: 2 squares of paper, one slightly larger than the other, and tape

Congratulations on your new paper kunai! 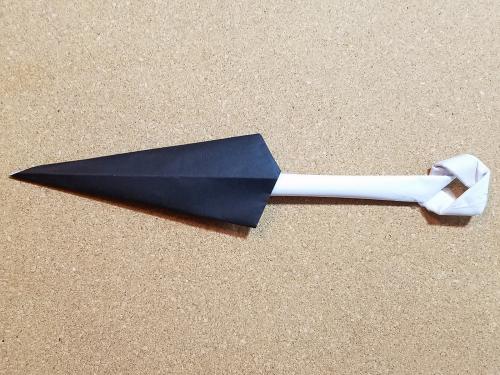 The kunai knife is a commonly known ninja weapon. It does not look like a typical knife today. This knife had multiple purposes in ancient Japan, from gardening to weaponry. The kunai knife diagrams are dominant in Naruto origami, based on the popular Japanese anime television series.

A kunai knife has a sharp, pointed head that looks like a spear. Unlike a paper sword, the handle of a kunai knife is short and has a looped hole at the end. The kunai knife is an intermediate level project. While the folds are fairly easy, the knife has many steps. Follow directions in a diagram or watch video tutorials on useful origami websites like the following:

You can figure out how to make a paper knife that is not kunai style, too. Advanced origami folders might enjoy planning their own Swiss army knife, like the one by Joseph Wu. You can also try making an origami flip knife or a ninja throwing knives out of paper.

The LoveToKnow tutorial How to Make an Origami Knife shows readers how to make a folding knife with both written instructions, illustrated by photographs depicting each step.

Another place to find instructions on how to make a paper knife is through origami books. Look for one that is themed for ninja weapons or Japanese weapons and check the index to see if a knife diagram is included. Pick up a book that includes basic folding instructions if you are a novice origami artist.

Tips on How to Make a Paper Knife

Add your knife to your collection of paper weapons and display it on a mantel, in a bookcase or on a set of shelves. You could even make a separate collection of knives in and of itself, with various knives on display. Include the kunai knife, flip knife, folding knife, and throwing knife in your collection.

Follow these tips to ensure that your paper knife project is a success:

Add a paper knife to your other origami weapons. Use the diagrams, videos and instructions above if you do not all ready have a favorite knife to fold. After your knife is finished, display it proudly with your origami throwing stars, paper guns and paper sword.

0
Comments
© 2006-2020 LoveToKnow, Corp., except where otherwise noted. All Rights Reserved.
Resources, Advice & Tips for Covid-19
Read More
How to Make a Paper Knife