German Christmas stars are made from four long strips of paper woven together in a pattern that creates an eight point star. The stars are often called Froebel stars or Moravian stars. They are a traditional Christmas decoration.

How to Make a German Christmas Star

The German Christmas star uses four strips of paper. To begin, cut an 8-1/2-inch by 11-inch sheet of paper into strips that are 1/2-inch wide. Tape together two strips of paper so you have one strip measuring 1/2-inch by 21-inches. Repeat until you have four strips that are this length. Cut both ends of each strip at an angle to make them easier to weave.

German stars are traditionally made in just one color, but this tutorial uses four different colors of paper strips to make the pattern easier to understand. If you are working with paper that is all one color, make small markings on the ends of each strip to help you tell them apart as you're following along with the instructions.

Forming the Front of the Star

1. The star begins with a simple basket weave formation. Arrange the strips so they look like the photo below. Do not worry if your tape is showing. The tape will be not be visible when your German star is complete. (See Photo 1.) 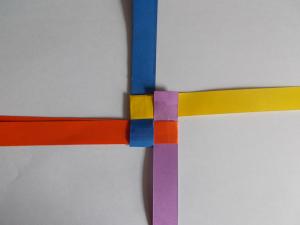 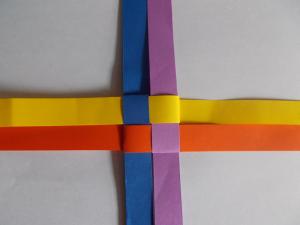 
3. Begin making the points on the star. Fold the bottom left strip under itself to make a triangle. Fold the strip 90 degrees upwards making a triangle that points in the opposite direction. Fold the strip in half and tuck it under the weave. Do not pull too hard or you will rip the paper. (See Photo 3.) 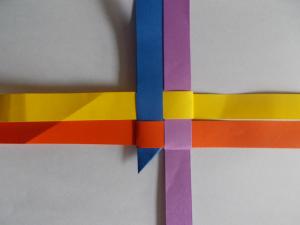 
4. Turn the project 90 degrees clockwise and repeat to make the next point in the star. In this tutorial, fold the purple point followed by the orange and yellow points. (See Photo 4.) 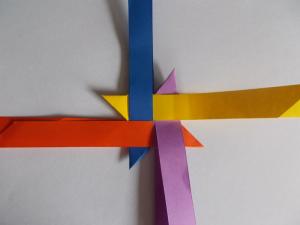 Forming the Back of the Star

1. Flip your paper over and rotate it so the blue strips are on the bottom left side. Begin working on the reverse side of your German star. You will need to create four more points for the star using the same technique you used in Step 3 and Step 4 of the previous section. Make the point of the blue strip first, followed by the purple, yellow, and orange points. Use the longer of the two strips of paper to fold the points.

2. When you're finished with this step, your German star should have eight points. On each side, the two triangle points should slope in to meet each other. (See Photo 5.) 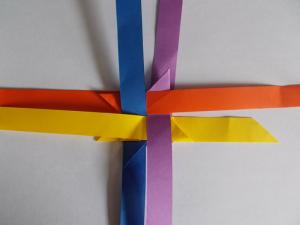 Creating the 3D Points on the Front of the Star

2. To finish your German Christmas star, you need to make four 3D points in the middle of each side of the star. This is the trickiest part of the project. The first point will be made with the blue strip. Fold a triangle by bringing the strip behind itself. Stand the triangle up on end, and carefully slip the strip through the strip that is directly to the right. For the blue strip, this means you should be threading it through the yellow woven slot. If the paper doesn't go through easily, try trimming the end of the strip so it has a sharper point. (See Photo 6.) 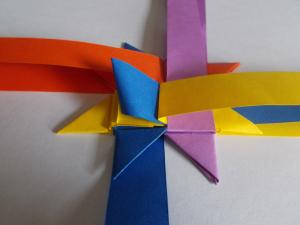 3. When you're done with the blue strip, rotate your paper clockwise and repeat the process to make the orange, purple, and yellow points. Fold the points in this color order for the best results. (See Photo 7.) 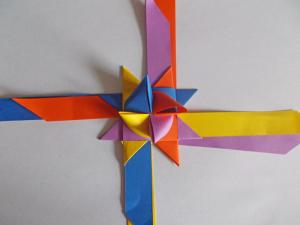 Creating the 3D Points on the Back of the Star

1. Flip the paper over. Arrange the paper strips so that each tail lines up with the two points of its matching color. Use the same technique you just learned to make the points on the back side. When you're done, you should have one tail of paper coming out of each point of the star. (See Photo 8.) 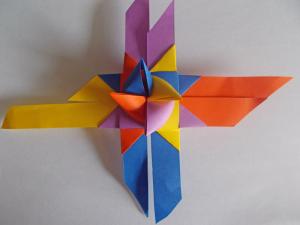 2. Use scissors to carefully trim off the remaining bits of paper. The eight flat points of the star you created in the first two sections of the tutorial should be your guide for trimming. Your German Christmas star is now complete. (See Photo 9.) 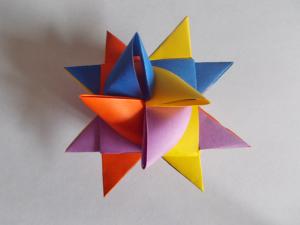 These stars make lovely Christmas tree decorations, but your folded paper stars can also add a nice personal touch to a gift or decorate your dinner table. Hang larger folded stars with ribbon from doors or banisters.

In Germany, making the stars is a family project. For kids especially, learning how to fold Froebel stars is a lesson in arts and crafts, mathematics, and holiday history.