A number of origami creations are actually 3D origami figures. To be three-dimensional, origami must, according to the definition from YourDictionary.com, have "depth or thickness in addition to height and width" or have a "lifelike" quality. By both of these definitions, 3D origami is common. 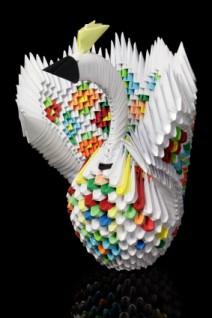 Origami animals are some of the most commonly made 3D figures. While you can find instructions to make two-dimensional or abstract animals, most have a lifelike quality and the ability to stand, sit or even move. The flapping crane is one example of this. In order to create a more realistic 3D animal, origami instructions may create a pocket in which you blow air or push out, creating a three-dimensional figure.

Various shapes are rendered with 3D qualities, too. The lucky star is a small origami shape that can be made with both dollar bills and origami papers. It is possible to turn hearts, regular stars, squares, rectangles and more into 3D shapes.

Gifts, decorations and toys frequently take on a three-dimensional shape. Origami boxes have width, height and depth. Flowers like roses and lilies are usually lifelike 3D figures. Origami boats and jack in the boxes are two toys that are done in three-dimensions.

Most, but not all, modular origami figures are 3D. Make modular origami by putting together several pieces of origami to create a whole figure. View examples of modular 3D origami at PaperCraftCentral.com.

The number of online origami diagrams available makes learning origami in 3D easier than ever. Look for 3D diagrams and figures at these websites:

While you can make origami things in 3D using diagrams you find online, it may be more useful to have a reference book at home, especially once you move beyond the simple 3D figures that only use one sheet of paper. These books, available at Amazon, may offer you some guidance for creating three-dimensional or lifelike figures:

Intermediate and advanced origami folders often have the experience and skills needed to move from simple figures into making 3D origami. By continuing to develop your origami skills through 3D figures, you will never get bored.